CodeBlueTO's History and a Model for Activism

Paula Fletcher stood up in the council chamber as the last speaker on item EX 9.6, a ‘consensus’ motion on Toronto’s Port Lands. As the local councillor for the Port Lands, Fletcher had been particularly busy for the past three weeks. In that time, City Hall- and the city at large- had become embroiled in a debate as to the best vision for ’s Port Lands.
An undeveloped former industrial site close to the size of ’s downtown core, the Port Lands was the apple of Rob and Doug Ford’s eye. Located on ’s eastern waterfront, they knew it could attract a substantial amount of money if sold to developers immediately, and this money could then be used to balance the operating deficit, pay down city debt or eliminate the land transfer tax.
It was Doug Ford’s job to get this done, to muscle through Waterfront Toronto, the agency with the long-term plan and the authority. At the same time he had to convince Council and Torontonians this was the right thing. With slicked back hair, playful banter and the ability to put forward a vision, the older Ford brother comes across as a consummate salesman. Yet there he sat in front of Fletcher, leaning back in his chair and subdued. In what was supposed to be his triumphant day, Ford didn’t say a word on the item.
Fletcher, on the other hand, made sure to mark the moment. Dressed in a light blue suit and sporting a sharp navy button on her lapel, she gave context, “This is a moment and this is a Jane Jacobs city”.
While stopping the Ford Port Lands vision likely won’t share the same historical importance as Jacobs and Friends defeating the Spadina Expressway, here too was a group of highly engaged, vocal and organized constituents. Sitting behind Fletcher in the audience were a group of activists calling themselves CodeBlueTO, the name scrawled across Fletcher’s button.
As much as the Port Lands was a story about the Ford Team’s governance style or the Mushy Middle finding its backbone, there was something else. It’s a story of citizens successfully voicing their message, capturing the attention of politicians, and bringing them to their feet. 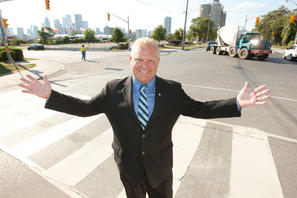 Ears to the Ground, Constant Vigilance
Cindy Wilkey knew she was going to be contacted imminently. For months she had feared this day was coming, and it was right around the corner. A lawyer and long-time advocate for the and area that she calls home, Wilkey had heard troubling news through the grapevine.
Back in April, she knew something was going on as soon as Doug Ford accused Waterfront Toronto of being a ‘boondoggle’. When she received advance notice on Thursday, August 25 (see timeline here) that there would be an announcement about Waterfront Toronto from City Hall, she knew it was going to be bad and had a rough outline of what it was going to be.


After weeks of being hammered in the media and by groups like CodeBlue, Civic Action and a group of 147 planning experts, the mayor’s poll numbers were dropping rapidly. Now with a 42% approval rating, Ford was vulnerable and Robinson spoke up against his plan. Executive member Michelle Berardinetti followed suit as well as Deputy Speaker John Parker.
The mission to connect the voices of a large group of citizens to moderate councillors through social media, petitions and waterfront knowledge had worked. It was now a virtual certainty that the Ford vision would not pass, it was just a matter of how many concessions they would have to give, if any.
The Resolution
Emboldened by their political position, CodeBlueTO released a ‘no compromise’ document the weekend before the vote, outlining areas that they could not give up (Waterfront Toronto as lead agency, Prioritization of Don naturalization and working within existing environmental assessments).
They held a rally at City Hall called “Behind Closed Doors” with supporting events and McConnell and Fletcher singing the titular song. It was an event that could have turned angry very easily but the mood was kept light and focused on a positive message with substantial criticisms.
On the other hand, Doug Ford had went off the rails over the weekend going so far as to calling in to Josh Matlow’s radio show, accusing Ken Greenberg of being married to Adam Vaughan’s EA (they’re not), stating that Janet Davis bullies him and parsing words over what constitutes ‘horse-trading’ with Matlow. It perfectly encapsulated his campaign: out-of-nowhere, alienating, bizarre and brash.
And so Doug Ford sat in council, defeated by the likes of Fletcher and McConnell, moderates like Robinson and even Ford allies. According to Fletcher, this was in no small part due to CodeBlue, “With an exceptional knowledge base and a good ‘rolodex’ they created a port in the storm and encouraged Torontonians to speak out for what they believed in…The state of civic life in Toronto is as healthy as ever."
Long-time activist Wilkey shared the sentiment, and found it personally fulfilling, “The group was politically savvy, energetic, able to operate in traditional and social media, smart, informed and fun. And I believe we made a difference.”
Wilkey’s observation points to a model for contemporary activism. CodeBlueTO didn’t succeed by doing the opposite of Doug Ford’s single-minded bullying, but because they integrated their diverse and complementary personal skills into their group tactics.
They gathered a passionate group of knowledge experts, communicated a condensed and positive message through old and new channels like social media and used a two-pronged approach to engage in public outreach and political persuasion. In a way, it was a model example for affecting change in the community.
Their activism- often a derogatory word in politics- was appreciated. As Fletcher finished her speech and Council unanimously voted for a consensus that only gave token concessions to the Ford Vision, applause broke out.
But it wasn’t just from the City Hall watchers. Most of the politicians turned around and stood to face the audience and gave a sustained applause to them. Even the chamber camera broke tradition and panned the audience, capturing a moment when the ideals of activism helped to (briefly) change the tenor of politics.
It was Laidley’s favourite moment of the three weeks, a validation of the impact a small group of people can have. Asked about a lesson from the experience, she offered, “A city is not just created by those who have the power to make decisions, it’s shaped by all of us. All of us have to take responsibility for how we’re governed.” 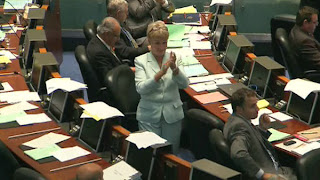 CodeBlueTO will continue to cover the waterfront. For the purpose of this article, some people who made significant contributions were not covered.
Posted by David Hains at 11:29